Hey guys, a lot has happened since our last blog post. We bought an AC-20 Motor which should arrive very soon. We also got a AC motor controller from SevCon.
When we took the engine off CholoCycle we realized several things. We had a lot of space for batteries, several anchor points to mount stuff, and sadly, one of the previous owners had tried to cut the frame :(. This meant we had to dismantle the frame so we could take it to an experienced welder who can weld aluminum. Thanks to Scott from the Central Machine Shop for helping us out!
The first thing we did after taking the fairings and seat off was to make a mock-up of our motor. We conveniently found a PVC pipe that was around the same diameter as our motor. 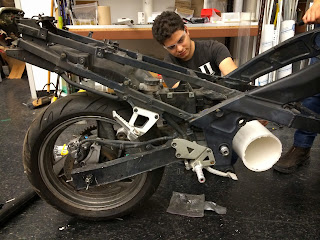 While we were looking for the best place to mount the motor we realized how dirty the frame was. We had three options to clean the bike:
1. Bring a bucket of water and rags to the shop and wipe it down.
2. Roll it home and hose it down.
3. Roll it next door to D-Lab and shower it..... literally


Now that CholoCycle is clean we cut out cardboard to make a quick model of the aluminum plate we would use to mount the ac-20. 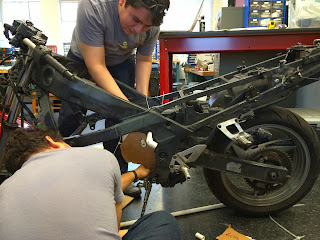 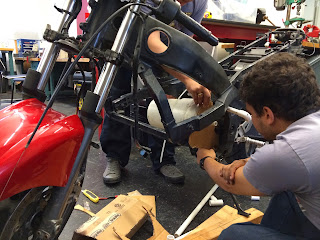 The first two anchor points for the motor mount were not hard to find. The only problem with them is that they are not coplanar. This means we will have to make a spacer for at least one of those mounting points. More on that later! For the third mounting point we are thinking about welding a piece of c-channel (or maybe L-bracket) onto the side of the frame. We would then bolt the motor mount onto that c-channel so the mount is removable.


After taking apart the frame we also made new battery mock-ups. We settled on two different configurations. One in which we have the two batteries mounted side by side vertically. This means we would have to cut the cross-arm that joins the two sides of the frame. The second configuration would not require us to cut off the cross-arm. We would place them on top of each other in a criss-cross pattern. We still don't know which batteries we are getting but it seems that all the batteries will have the same width and height. For this reason we think that the vertical configuration would allow us to use longer modules.

Looks like the Sevcon Controller is arriving tomorrow and the ac-20 will arrive very soon too. More to come in the next couple of days!

Roberto and I have been wanting to make an electric motorcycle for the longest time. This summer we actually started planning and budgeting everything out. over the last couple of months we had been craiglisting and going over different places in MA to spec out bike but couldn't find an appropiate one.About 2-3 weeks ago we were fortunate to receive techX project funding. We got $500 funding that we decided to put towards the frame acquisition. We intensified our craiglist search and last week we found some guy in dedham that had a bunch of bikes with blown engines he was willing to sell to us. We visited his sketchy ass shop (seriously, it looked like an abandoned warehouse from outside) and we found a kawasaki ZX-6R that we liked. We brought the frame back to MIT and the next day starting gutting the bike.
...and the next day starting gutting the bike.

This turned out to be a much tougher job than we expected even considering we had 5 people (plus a camera-man) working on this.
Hmmm, that didn't work...How the hell did they even get this engine inside there in the first place?!
After several different attempts we finally managed to separate the engine from the chassis.


Taking off the engine was a cool and rather challenging task, we put a jack and a piece of wood under the bike and then unbolted the engine and then lifted the bike off the engine. This last part was especially tricky given the weird shape engines have. Nevertheless, after about 3 hours we were done! Thanks to Esther M., George H, Heidi B., Charlesg and Rachel D.C. for their help in the gutting!We took all the stock fairings off cause they were in pretty crappy condition and we are gonna buy a body kit for the bike. Here are some options we found: http://tinyurl.com/cholocycle. I put up a poll to ask our friends on fb what color the bike should be. We got pretty hilarious responses, check them out below:

Roberto and I went to N52 today and laser-cutted a cardboard mock-up of one of the batteries we are considering. We tried several configurations. Our two main concerns are that we need to leave space for the motor (modeled as the red circle in the first picture) and we want the batteries as low as possible for a lower center of mass.

With the frame gutted, I started the mechanical design for the battery and motor holder. I was looking for some CAD for the ninja and stumbled upon this gem. A guy named Daniel Nguyen made a CAD of a ninja for his Intro to Cad class in UCLA. He intended to CAD the 2009 Ninja but he used the specs from a service manual for the 2002 model, which is the model we bought! I emailed daniel and he was gracious enough to let us have the CAD! Woohooo!We imported the CAD to solidworks and got rid of fairings and engines and exhaust etc and gave it some colors.

We mainly need the frame CAD so we can fit batteries and motors and whatever mounts we have.We are in the process of buying more stuff for the motorcycle (like motor and trying to get some batteries). We'll keep posting stuff during the build! Any questions let us know in the comments below.

So a couple of months ago I went back to Mexicali, Baja California, Mexico. Which is not in SoCal even though most people think that whenever I mention "Baja California" -_-. Anyway, I stayed there for a few days only so I could attend my sister's high school graduation (she's going to Princeton! wooo). During those days, I learned that one of my friends, Juan Bustamante, had a cousin who was throwing away a tiny motorcycle that wasn't working anymore. I went over to see if I could fix it or at least figure out what was wrong. The first things I checked were the battery and the motor. I don't really have any tools back home besides a screwdriver and a wrench so there wasn't much I could do but luckily my Juan had just bought a multimeter so we probed the battery and found that the 18v battery only had 4v across it. Which made sense considering the lead acid battery had not been charged in about four years. To check if the brushed DC motor still worked I had to place enough voltage across it make it overcome its own inertia  and have it start spinning. I didn't have a variable power supply so instead we got eight AA batteries and taped them in series to make a 12v "pack". The motor did spin so I decided to keep it for a future project (or maybe just to take it apart and use its stator). After we diagnosed the problem, Juan decided that he was never going to use it anymore so he offered to give it to me. I was unsure about whether or not I should bring the pocket bike with me back to MIT considering that it's more than 2500 miles away and it might be a problem to bring on the plane. So I did a quick Facebook post to see what my friends thought about it. 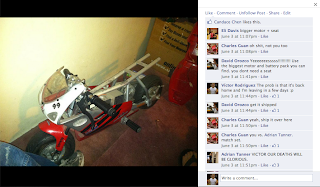 Clearly, they thought it would be awesome if I brought it and motorized it so I could race against Adrian who built his own electric pocket bike, MilliCycle.

The first thing I had to do was figure out how to mount the motor onto the frame. The original motor was a brushed motor and it had its mount holes on the bottom so the frame had a mounting plate for it. I decided to take advantage of this so I took some scrap metal I found in N52-318 (room where the MIT Electric Vehicle Team meets). It was an aluminum C-Channel so my ex-roomie Roberto used the bandsaws and drill presses in D-Lab to help me cut off one of the sides and make mounting holes for both the frame and the motor. We later realized that we did not take into account the aluminum between the motor and the pulley so we had to go down to MITERS to mill a pocket for it.
I wanted TinyCycle to be way more powerful than RailScooter so I used a motor twice as big as the one on RailScooter. It's a Turnigy SK3 6374 Brushless Outrunner. It's 192kv and has a resistance of .016 ohms. More importantly, it has more power than I really need on such a small vehicle but meh, it should be fun. For the battery pack I soldered two custom 5s2p battery packs in series. This means I have a 33v pack on TinyCycle; much bigger than the 24v battery pack on RailScooter. The motor controller is also different. RailScooter uses a sensored kelly controller whereas TinyCycle uses a sensorless 250watt jasonTroller. The jasonTroller was clearly TinyCycle's limiting factor so I plan to swap it for a more a 500watt jasonTroller. Hopefully that will give me enough power to do wheelies!

Garage Run with  a scooter, two go-karts, a quadrotor, and a tiny motorcycle
So many little EV's!
Garage Run from the Shane's quadrotor's point of view
So apparently, tinyCycle is a chick-magnet. A couple of TDC brothers and I were riding it around dorm row last Saturday night around 1am. Which is also the time MIT frat parties are over. Several girls walked over toward us and started asking me about tinyCycle.
I even got the above girl's phone number :)
Posted by Viictor at 7:55 PM 6 comments: